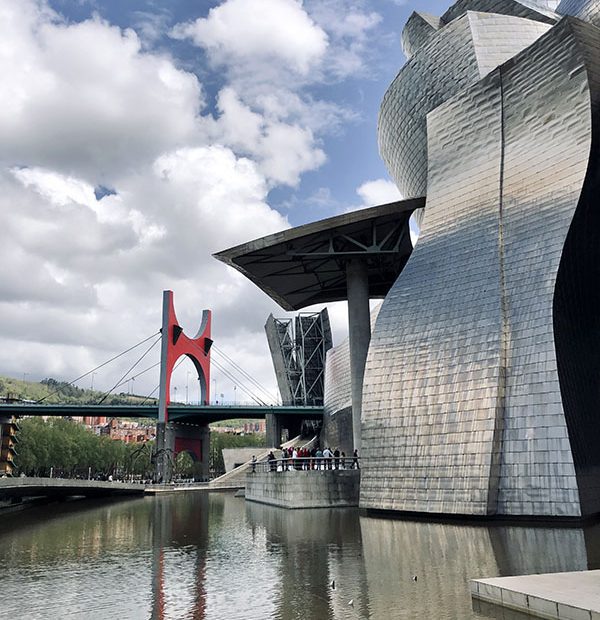 Can an architectural work by Frank Gehry be a valid reason to travel? Of course it is!

After having loved the Guggenheim in New York and the one in Venice, we couldn’t not check the box and pay a visit to the Bilbao’s as well. So, finally, we leave for a long weekend to discover the capital of the Basque Country.

We land early in the morning and arrive a few hours later in the city. We start exploring it from the vicinity of our hotel. Casco Viejo is the old part of the city where the small medieval streets intertwine to meet in the elegant Plaza Nueva, a square surrounded by loggias, palm trees and windows. Here the good mood of the city gives its best from morning to evening. Especially when it’s time to enjoy pintxos!

Walking around and exploring the neighborhood we find ourselves in the Plaza de Santiago where the namesake Gothic cathedral stands. The festive atmosphere pervades the streets that lead to the Ria de Bilbao that winds through the city. Overlooking the shore are the Teatro di Arriaga and – not far away – the Mercado de La Ribera which, with its colorful Art Deco facade from 1929, is the perfect place for an aperitif at sunset hour.

In the Abando district, the different architectural styles of the city merge, creating a blend of classic and contemporary. If you are looking for some instagram-spots, a mandatory stop should be dedicated to the art-nouveau facade of the Estacion de la Concordia. The Gran Via hosts a huge shopping area, fountains, churches and districts where there are numerous restaurants where you can taste delicacies from all over the world.

Not even the green areas are lacking in Bilbao, in fact, entering the residential district of Indautxu you have access to numerous gardens, we walk in the Parque de Dona Casilda Iturrizar after visiting the De Bellas Artes Museum. Time passes slowly while people are enjoying a coffee in the cafeteria, watching children play outside and families strolling by the museum windows.

The district is divided by the numerous bridges, one of which is the ultra-modern Zubizuki walkway which overlooks the Isozaki Atea district characterized by two 83 meter-high twin towers.

Following it, further on and more impressive, is the ultra-modern and geometric Puente De La Salve which is framed by the Arcs Rouge signed by Daniel Buren and offers a passage from one side of the city to the other and a panoramic view of the futuristic Guggenheim Museum.

We visit it and literally waste hours to watch it from different perspectives, both to fully enjoy its luminous beauty and to observe the installations that surround it such as Jeff Koons ‘giant and flowered Puppy and Louise Bourgeois‘ bronze and steel spider. We get lost in the spiral sculptures of The Matter of Time, take some photos of the luminescent tulips and observe in raptures the giant architecture that dominates on us.

We return during the day to snap it with the reflection of the setting sun and we observe it in the evening when, walking along the river, its sinuous shapes with an iridescent gray color are illuminated by evening lights.

Stopping by San Sebastián would be mandatory but the idea of ​​renting a car and setting off – again – since we only have a few days makes us choose a closer recommended overlooking the sea- destination.

The small seaside town of Getxo is an old port and the place where international architects created villas overlooking the sea for the local bourgeoisie during the years of industrialization. The charm remains unchanged and the villas have unique styles as well as an enviable view.

Also here is the Vizcaya Bridge which connects two areas of the city and is a Unesco heritage site. Arriving in Las Arenas by train from Bilbao, we walk through the old fishing village and then cross the Vizcaya bridge and reach the festive town of Portugalete.

The band plays under the gazebo in the city center, tourists and locals enjoy Sunday relaxation while eating delicious pintxos in bars and restaurants. A few steps uphill allow us to observe the two areas of the city from above.

On our last day the sun shines, we have a few hours left to spend in the city and we go up to Mount Artxanda aboard a cable car. From here one can see Bilbao in all its beauty with a panoramic view of the beautiful Guggenheim Museum and its gardens.

Bilbao is small, easy and dynamic – the perfect weekend getaway. A hit and run may be enough to savor the essence of this Spanish city with an extreme cosmopolitan charm.

SLEEP: Sleeping in the city isn’t prohibitive and it’s easy to find budget options. We slept at the Sercotel Arenal Bilbao and we enjoyed it very much because it is central and has nice, spacious and clean rooms.