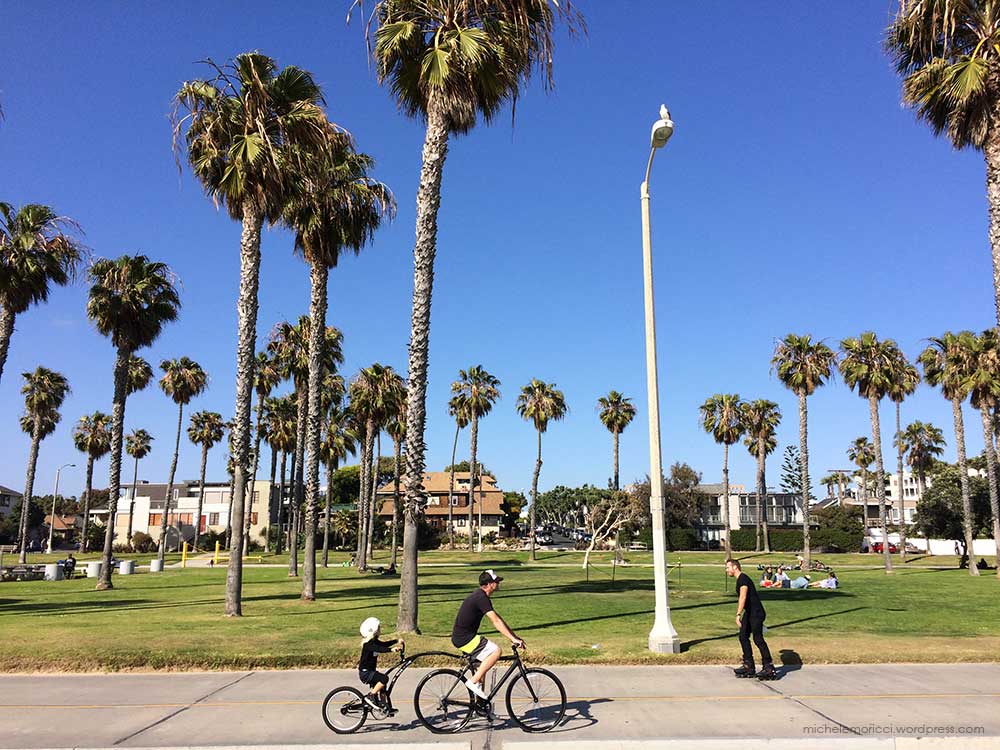 After a 5 hour-flight we landed at Santa Ana Airport. We pick up our luggage and our car rented at Alamo, they hand  us over the keys of a shiny mini-suv by Jeep that to us seems immediately giant. A new way of driving, six lanes and about 50 minutes separate us from our destination. I wield the navigator while Giovanni ride in the crowded queue. Our lovely apartment is in Sycamore Avenue one of the residential streets of West Hollywood, about 15-20 minutes away from the main areas of the city and the heart of the Gay quarter.

We have dinner in the neighborhood, we shop from Rhalp’s late at night and go back to the apartment overwhelmed by tiredness. During the first few hours immediately we learn two essential things about Los Angeles; First: time is a dancer but the sun always wins. Second: the parking lots are spacious, they are virtually everywhere and you just swipe your credit card to pay.

In the morning we wake up and it seems almost impossible to be finally in the City of Angels. The streets are enormous and endless. The residential houses  with driveway and garden, are a dream. Palm trees frame the shining sun and the whole city is an agglomeration of buildings from disparate geometric shapes.

We park along the Walk of Fame and take pictures at the Chinese Theatre, at the footprints of the stars, to old buildings that surround the Hollywood Blvd and at the magnificent celebratory Hollywood sign shouting in capital letters. Later we go straight to Melrose Avenue crowded with shops and restaurants. We stroll through the shops and eat delicious Onigiri at Kawaba Rice Ball in the heart of the Melrose District. In the afternoon is the turn of Beverly Hills. Palm trees line the road, every architectural detail of the district and the Civic Center seem to have written allover “90210“. We walk on Rodeo Drive envying who enters and leaves the boutique with overflowing shopping bags. We remain in awe from the small collected town and it’s unique atmosphere.

On day two, we make a leap at Halliwell’s to see the infamous home of “Charmed“. Despite initial doubts, we are not the only nerds in the area to pose invoking the power of three. Then we take the San Diego Freeway to reach the Getty Center. We knew it would be amazing but nothing had prepared us to the architectural beauty of this artistic center lying on the desert mountains of Los Angeles. The combination of minimalism by Richard Meier and the surreal atmosphere convince us to stay for lunch to enjoy salad, veggie wrap and a breathtaking view.

There are so many things to see that we are undecided about the next stop, but since the sun is shining and it’s Sunday the beaches of Santa Monica seems the only possible goal. We cross the pier to spot the last leg of the “Route 66“. The laughs of  children come from the Ferris wheel and from the beach, where the cold water cools the ocean shoreline and their little feet. Lifeguard station lots look exactly like those of Baywatch. Irresistible. We spread our mat on the warm sand and enjoy the sun of LA.

Before evening we walk along the Ocean Front Walk to reach Venice Beach and its folk beaches. Between Fast Food, American Apparel and Graffiti we run into Skate Park and Muscle Beach, between them stands a contemporary reinterpretation of Botticelli’s Venus worthy of Baz Luhrmann. The houses overlook the beach and in the air there is a heady smell of joint. The sun sets listless while a fresh light mist blurs the palm trees and the center of the city in the distance. Back in town for dinner, we sit at the table of Robata Jinya, we order Ramen and vegetarian Maki. We taste every delicious bites while the cars whizzing along the streets of West Hollywood.

After waking, shower and breakfast we enthusiastically head to the Warner Studios. We stroll down the sets while they are filming a new episode of Pretty Little Liars. We visit an exhibition dedicated to Batman, one dedicated to Harry Potter and visit the exteriors where  several series like Ghost Whisperer, Big Bang Theory and ER were shot. There are still some set of Gilmore Girls in front of which I melt. Then comes the long awaited moment, which is the rightful photo on the couch of F.R.I.E.N.D.S.

Later we go to Mulholland Drive to better see the Hollywood sign and then we jump at Chateau Marmont. We would like to get in and maybe have lunch there, but when the second Ferrari enters the gate, we understand it isn’t a proper place for us nor for our wallets. We make a pit stops at 4616 of Los Feliz for a quick picture to the famous apartments of the TV series Melrose Place and proceed to the Griffith Park. One of the largest parks in North America since 1882 home of a ibrilliant vegetation, of the Greek Theatre and of the beautiful Griffith Park Observatory. From this building with Hellenic influences the view is unique, in front of us the wide lanes of the freeway in Los Angeles and behind us, along the Mount Hollywood Trail, stands out – yet again – the huge Hollywood sign.

We rest enjoying the fresh air, the quiet movement of the crests of the trees blowing in the wind while the sun warms our faces. Before making an afternoon break at Starbucks with Lemon Cake and Coffee Frappuccino, we cross the city to arrive to Downtown not far from which is the most historic part of the city: El Pueblo. A cluster of ancient buildings, restaurants and markets with an unmistakable Hispanic contamination dated 1781. Festive flags, a small square with Mediterranean warm colors and the church of Nuestra Senora de Los Angeles that characterizes the district. Before returning to our apartment we watch the sunset on Sunset Strip.

The day after we decide to go back to Santa Monica to see more of the city center and enjoy the many small shops in the area. We go up to Abbot Kinney Blvd where everything is small and cozy; made of modern houses, furniture design and fashion stores. Not far away are the Grand Canals of Venice, an American revisitation of the typical canals of Venice, they overlook terraced dream. Then, without pause, we move to Malibu.

Giovanni guides swaggering along the Pacific Coast Highway with the ocean on one side of the road and on the other the most beautiful villas are watching us from the top of the desert hills. In front of us a unique spectacle that allows to savor deeply the essential culture of Los Angeles. The pier of a blinding white against the Pacific Ocean creates a game of perfect geometry. We have lunch at Malibu Farm with ocean view. We order Burrata Fruit for two and we enjoy the mix of flavors with arugula, pear, pomegranate and burrata soaked in vinegar. Seagulls fly in the sky while the surfers raging in the waves on the cost. After a refreshing lunch under the sun heat finally we go to the beach and then relax to savor deeply the air of the Ocean.

We would like to visit so many things that we would need a lot more days but time is running out and only one day and a half  is missing at the end of our trip. We spend the penultimate day at Disneyland Resort. Like two children, we get lost in this fairytale atmosphere of childish and reckless games from the forest of Indiana Jones, the haunted houses, from futuristic space to the house of Snow White. We turn children for a day, realizing yet another dream of this trip.

Once our luggage are ready does not have much time left before departure. We say goodbye to our little apartment. Before we get back on the road, we grab a bite at LaBrea Bakery. Outside, the sky turns gray, and it starts to rain. Got into the car, the rain comforts us making less bitter the imminent departure, while in the distance we already see the LAX. Sitting at the edge of British Airways, we sigh excited knowing that we had lived, once again, something special and unforgettable. Together. 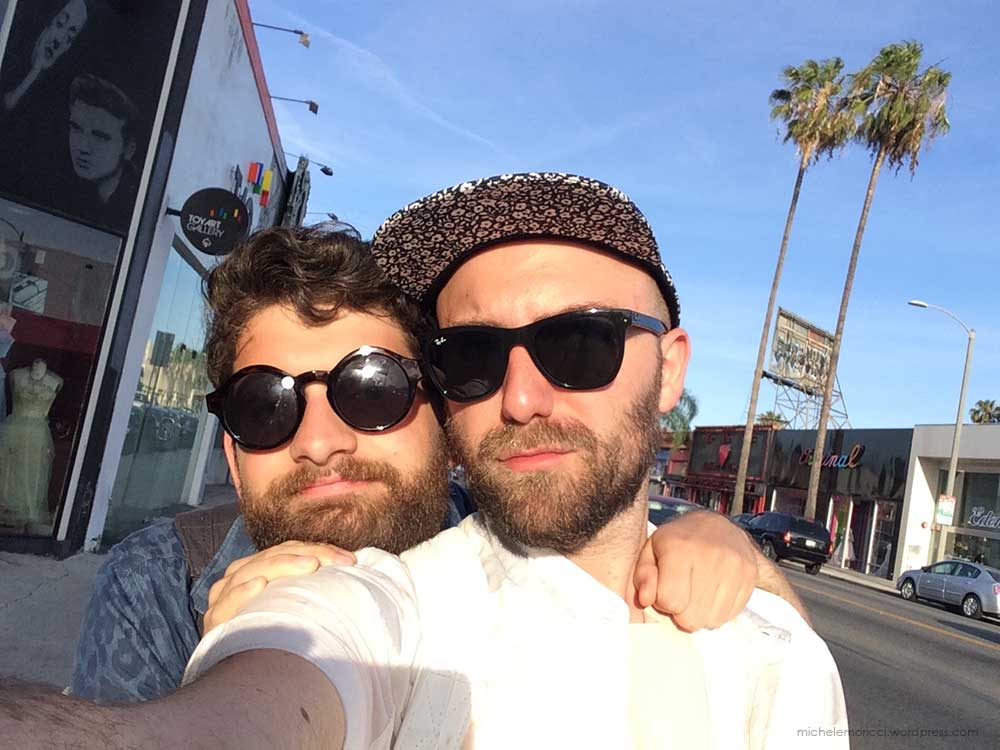 POPPIES❤️‍🔥 Do you see what I see?

LANDED 🪐 on Earth by mistake